At the village street between Klein Berßen and Klein Stavern are several neighbouring megalithic tombs surrounded by fields and woods. The road crosses the little river Nordradde where once Deymann’s mill a watermill was. Of what were probably a great number of graves, only four have survived in more or less good condition. 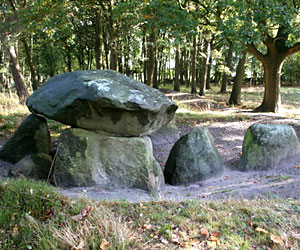 Grave I and II are remarkably small, 2.2 and 3 metres respectively. Grave II is basically in ruins. Grave I tells us that one cannot draw conclusions from the size of the grave chamber to the size of the boulders used, because the capstone of this grave –still in situ – is enormous. Grave III must have had a longer chamber, but its state of preservation is also quite bad.

Grave IV’s construction differs distinctively from the others. A 6 x 3 metre chamber lies within a rectangular enclosure originally extending 33 x 7 metres, a so called Hünenbett (Giants Bed, from German Hüne = giant, Bett = bed). But most stones of the Giants Bed are missing.

At the northern end of the village of Klein Stavern is a partially destroyed grave on top of a hill west of the road. Essential parts of the grave chamber and enclosure are still there, but a lot has been removed during the last centuries. The remaining areas show a chamber width of two metres and give hindsight of a once lordly site.

This remarkable megalithic grave is one of the most beautiful of the Hümmling and the entire Emsland. The site on a little hill south of the road leading from Klein Stavern towards Bruneforth settlement represents a very well preserved Emsland Chamber. The unspoiled arboreal vegetation of the hill adds a special touch. 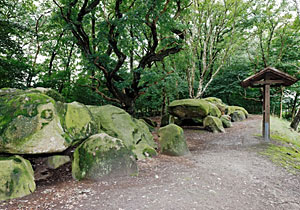