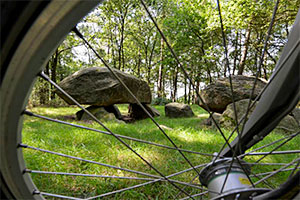 The wheel had probably already been invented when the people of the Neolithic period settled down about 5000 years ago and began to build stone houses for eternity for their deceased.

We encounter many of these striking buildings made of boulders weighing several tons in the diversified regions between mid-range mountains and seacoast, between Ems, Hase and Hunte. 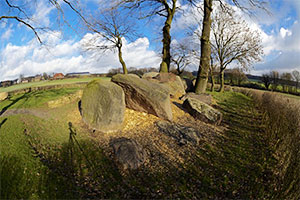 The Bicycle Route covers 380 kilometres - over the rolling hills of the Wiehengebirge, alongside canals, through flood plains, expansive moors, forests and lush meadows.

Cities such as Osnabrück, Fürstenau, Haselünne, Meppen, Cloppenburg, Wildeshausen and Oldenburg tempt with architecture, art and culture, good food and plenty of comfortable beds to gain new strengthen for the next legs. Charming restaurants in countless villages and towns offer the opportunity to refresh, have a drink and snack and let the unforgettable impressions leave a mark. 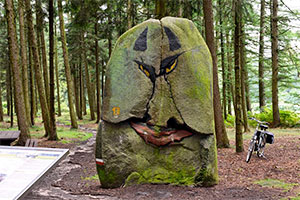 The trail leads the cyclists directly to nearly 20 stations. And a small side trip by bike or - why not - even on foot guides you to all other megalithic tombs along the Route of Megalithic Culture. So everyone is able to discover the fabled monuments on relaxing walks through beautiful landscape.

Just like the tourist holiday route the Megalithic Culture Bicycle Route is also signposted in both directions.

The booklet “Das offizielle Handbuch zur Radroute der Megalithkultur“ is available free of charge at Tourismusverband Osnabrücker Land e.V. and in the tourism offices of the region. The brochure provides information about the regions Osnabrücker Land, Emsland, Oldenburger Münsterland and the Wildeshauser Geest as well as the cities of Osnabrück and Oldenburg. It also includes tips for gastronomy and accomodation, in addition to maps at a scale of 1:50,000.