An enormous monolith of almost four metres in height stands hidden in the forest north of the village of Vehrte. The “Süntelstein“, well known far beyond the Osnabrücker Land, is an upright set granite boulder that has most likely served for cultic purposes in Neolithic times. It reminds us of menhirs often found in Brittany. It is not certain weather it is surrounded by a stone enclosure and if there are more megalithic structures close by.

When the first church was built in Venne the devil still lived in Vehrte Bruch on the other side of the hills, where “Devils Baking trough” and “Devils Oven” are still to be seen. He disliked very much the sacred work of church building. In order to block the door to the church he got a big granite boulder around midnight, wrapped a thick chain crosswise around it and carried it on his back uphill. But the stone was so heavy that despite his enormous strength he started feeling the heat like hellfire. Sometimes he just stopped to catch his breath.

Time passed by and dawn approached. And just when the devil reached the top of the hill the first rays of the rising sun shot towards him from the east and a wakeful cock crowed from Venne valley its morning greetings. This put an end to the devil’s nightly deed. Furiously he took the boulder at the top end and slammed it with all his might into the hard soil of the hill.

Since then the devil has left the area. The stone is still in the same position where it had been rammed into the ground. The hard crash has left its traces though; where the chain surrounded the stone in the middle and from top to bottom cracks appeared and chain marks are noticeable at the outer rim s of the cracks. And the devils body imprinted visibly on the Venne facing side of the stone, because his infernal body heat melted the granite where he had touched the boulder.

Every morning ever since with the first rays of the rising sun the stone turns three times on its own axis. To commemorate the saving of the church in Venne by the sun which destroyed the devil’s nightly deeds the stone is named “Süntelstein”. 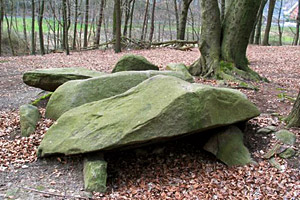 These two neighbouring graves in a mixed forest near the village of Vehrte fired people’s imagination in a way that they were looked upon as work of the devil and named accordingly. Both graves show no trace of an enclosure, though up to about 1920 stone kerb relics were supposedly recognizable around the “Baking Trough”. Their chambers are only 6 metres long and the “Baking Trough” is in better condition than the “Oven”.