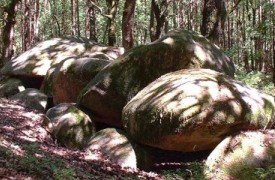 The „Steenhus“ (Steenhus = low German for “stone-house”) has nine bays – opposing orthostats with a capstone. The orthostats are, with few exceptions, still at their original places. Six of nine capstones have fallen into the chamber. A very massive capstone of 3.1 x 1.9 metres marks the grave chamber’s entrance. It is noteworthy that the northern side wall is not a straight line but bulgy. It is 2.3 metres wide in the middle and tapers towards both ends ending up at 1.8 metres. Two stones that have fallen into the chamber raise riddles: they may be interpreted as orthostats but might as well indicate a partition of the chamber. But such partitions of grave chambers are in fact only known from Mecklenburg-West Pomerania, Schleswig-Holstein and Jutland (Denmark).

Site 18b: Megalithic Grave at Klöbertannen 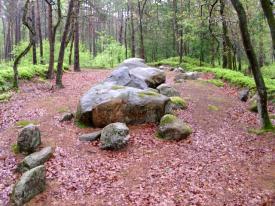 Somehow like the tip of an iceberg 14 orthostats stick out of the ground on the south side and 15 on the north side. The tomb has 14 bays and 10 capstones still exist. Interesting enough two of the orthostats were probably a little bit too short and a head-sized boulder was placed onto the orthostats to “assist”. A phenomenon that may also be observed at the Poldenhünensteine (station 20b) and the megalithic grave in Werlte (station 20 a). The oval stone ring surrounding this grave can easily be recognised on the south side, though many stones are no longer in their original position. Three orthostats and the mighty capstone of approximately 2.2 x 1.6 metres of the southern access are still there. 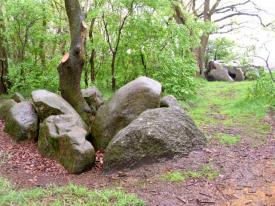 Right next to each other there are two different building types of megalithic tombs: a passage grave and a dolmen. The latter is north-south oriented, in contrast to the east-west orientated so-called “Emsland chambers” known throughout the Emsland. The passage grave has indeed the access on the southern long side typical for the Emsland chambers, but the characteristic stone ring is missing. The grave consists of four bays and tapers noticeably eastward from 2.7 metres to only about 2 meters width. The orthostats of this tomb are still in place, the mighty middle capstone is also still in position only the other two have slipped into the chamber. The dolmen consists of three bays and an end stone in the west, the entrance was on the southern narrow side. All capstones have collapsed into the chamber. 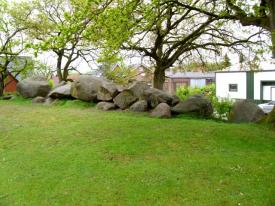 The Steenhus (= low German for Stone house) is one of three surviving megalithic graves in Börger. Approx. 180 metres northeast of this tomb are the “Hünensteine”, a badly destroyed grave almost the same size as the Steenhus with four capstones and eleven orthostats. About 250 metres southwest of the Steenhus is another, even more destroyed megalithic grave with only one capstone and five orthostats. Nine of the originally eleven capstones still exist of the east-west oriented burial chamber of the Steenhus. Only at the north side one of the eleven orthostats on each side is missing. And the orthostats of the narrow sides are also there. The access in the middle of the southern side still has two orthostats. But only a single stone next to the entrance is left of the oval stone ring that surrounded the chamber.

To get to stations 18 a+b the Route of Megalithic Culture passes the premises of the Federal Office for Defense Technology Weapons and Amunition (WTD 91) (“Wehrtechnische Dienststelle für Waffen und Munition”). This area might be closed of to the public, because of blasting or military target practice:

It is imperative to observe road closures (traffic lights, barriers, set of lights).

Unauthorised access of the restricted area will result in danger to life and is prohibited!

Up to date information on closing times may be obtained here »»»